Getting The Mighty Ant 10x Advantage

Where We See It and How It’s Done 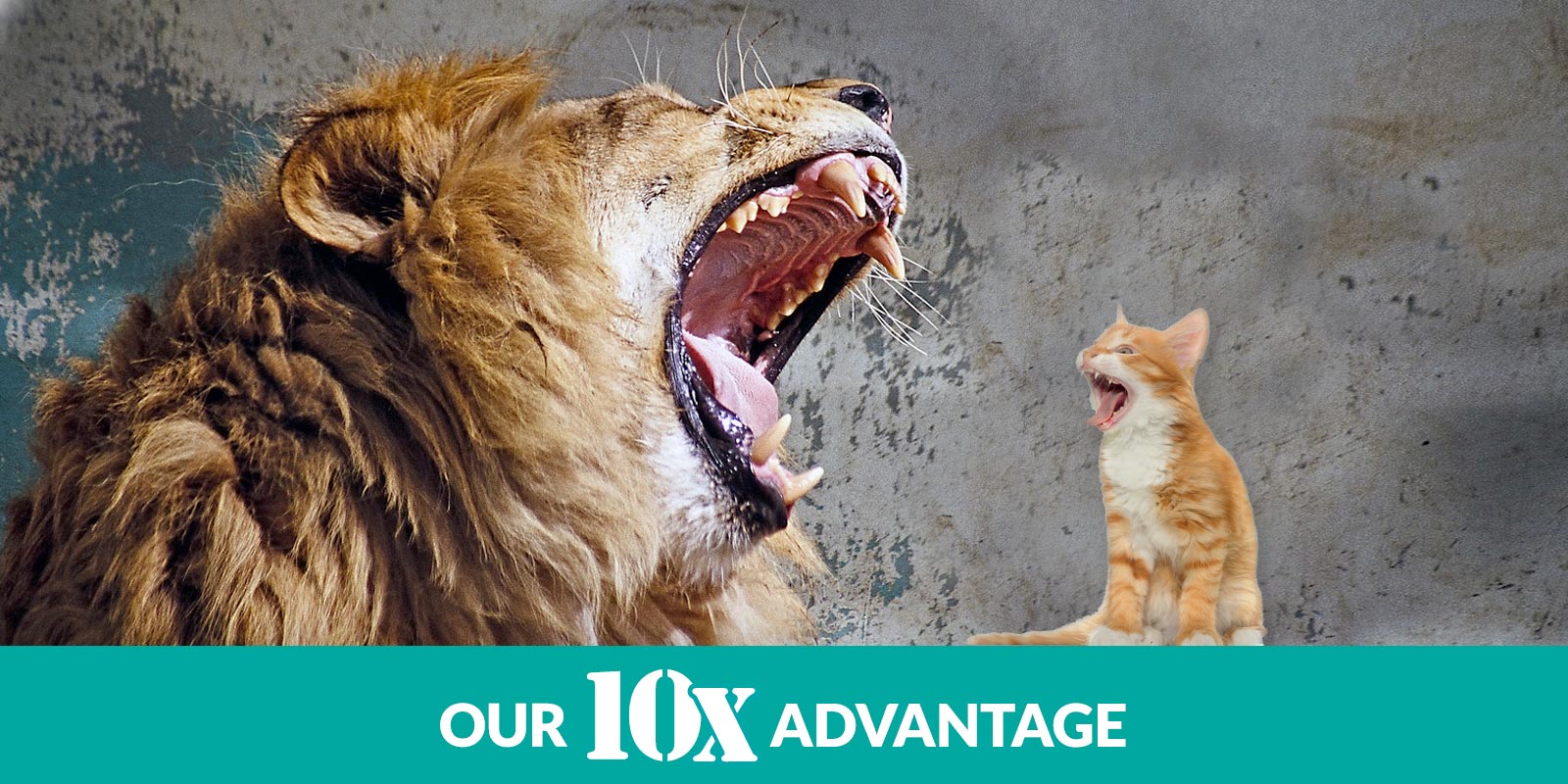 Recently, one of our clients received a demo of a software system developed by one of their investors with very similar features to the system we created for our client — except our system was more attractive, more portable, easier to use, and had been built ten times more quickly for one tenth the cost.

Years ago I showed an industry colleague a system Mighty Ant DataWorks had developed for approximately 100k. He was a developer for a large national consulting firm, working on a four million dollar project for a client, heading up a team of six programmers. His jaw dropped when he saw what we had produced. "Don’t show this to our client," he said.

In 2009 I had an opportunity to see a system developed over many years by Stanford University, similar to a major system created by Mighty Ant DataWorks. We had created something better than the Stanford system with one sixth of the programmer time, and the Stanford system was something they were so excited about they literally go around the country demoing it (which is how we saw it.)

In 2011, one of our clients showed a system we created to three of the nation’s largest banks, which combined do several billion dollars worth of business in our client’s field. Representatives of two of the three banks said our system was better than the one they used internally. The third bank didn’t make that claim (they had just finished a major project to create their own system so it was perhaps an awkward claim to make) — rather, they said they loved the system we created and asked if they could fly our client out to their corporate headquarters to demo Mighty Ant DataWorks’ technology to their own internal development team. In all cases, the system we created for our client was created with a tiny fraction of the time, and at a tiny fraction of the budget, of the systems created by these national banks.

What we’re seeing here, over and over, is a huge development advantage over competitors — roughly a ten times advantage, sometimes more, sometimes less. Mighty Ant DataWorks has repeatedly shown itself to be more productive, and to create markedly better systems, than the vast majority of our competitors.

Why is that? Three reasons.

Top developers don’t simply do the same thing as other developers but much better, they do different things. For example, one startup founder we worked with got a quote from another team where they offered to create the first 20 screens for his financial information management startup to get him a start on his project. For the same price, we gave him a system that ended up with over 300 screens. We didn’t do that by programming screens faster. We realized he needed a custom software system that allowed him to make his own interactive financial interview system, sort of like the interview system TurboTax uses, but for financial information. He then used it to build his own screens and test out the system end to end. Yes we were vastly better than the competition, but we were better because we actually built something completely different.

Hiring the best developers, with a mature development methodology, and great experience, is simply the best way to go. This is why all the software development literature says to always hire the very best people you can find — because custom development, hiring top talent is simply the cheapest option available.

A second reason for the Mighty Ant DataWorks ten times advantage is our tool selection. There is no magical tool or methodology in computer science that perfectly fits every problem. There are many different tools, each with their own strengths and weaknesses. Most developers use a narrow selection of tools, or even a single type of tool they know. We use many types of tools and approaches, and choose the tool to fit the job.

“The best programmers are not marginally better than merely good ones. They are an order-of-magnitude better, measured by whatever standard: conceptual creativity, speed, ingenuity of design, or problem-solving ability.”

Take for example my friend with the four million dollar job and the six programmers. They were using a Java front end with an MS SQL back end, with one strong programmer lead (my friend) leading a team of inexperienced programmers. For their particular application, that setup might as well be a cake recipe consisting entirely of "beat one egg with a heavy rock, then bake for one hour" — that’s not going to get you cake. But how could my friend tell his bosses this? After all, Java was super popular back then — everybody was using it. And MS SQL is an industry standard tool. How could they go wrong? They didn’t go wrong with the tools — Java and MS SQL are both fabulous tools — we’ve used both ourselves — they just happened to be poor choices for that particular team for that particular project.

The final reason for our ten times price and schedule advantage is simply that we complete systems while doing less work than much of our competition by reusing a great deal of code. We make broad use of high quality open source tools and frameworks, and have also developed a large base of propietary code systems — for navigation, reporting, update operations, windowing, interface issues, process monitoring, and much more, all of which we put to use in client products. In a job taking us a few hundred hours, we may include code systems that took thousands or tens of thousands of hours to develop. The intellectual property we bring to every job is part of our productivity advantage.

So is Mighty Ant DataWorks the greatest developer in the world and wherever we go we’ll just be ten times better than everyone else? Not at all. Send us to NASA to write embedded code for space probes, send us to Google to refine their AdWords system, or send us to work on the Linux kernel, and we won’t do any better than the folks already doing that work. (We’d also be grumpy about it as we’d missing talking to customers.) Those teams and projects are already staffed with some of the best developers in the world, and our decades of experience with other types of work don’t give us a leg up. While we might fit in, we wouldn’t stand out. Because in each of these cases you’ll already find some of the best developers in the world, using the best tools available for those particular jobs — and in none of those areas do our decades of experience and library of intellectual property give us an advantage.

But put us in our niche, in custom system development for the enterprise, for startups, and in business automation for work groups, where the developer pool is not the top slice of the very best, but rather the normal Gaussian distribution you find in any industry, and our top 1% qualities really shine.

We have a ten times advantage in our niche. We look for systems that require rich, strong interfaces, clients who appreciate clear and insightful design, fields where technology can produce outsized business results, and places where our existing code systems and experience give us an edge.

That’s our niche, and if you have a job where our experience may be applicable, we’d love to show you what we can do.